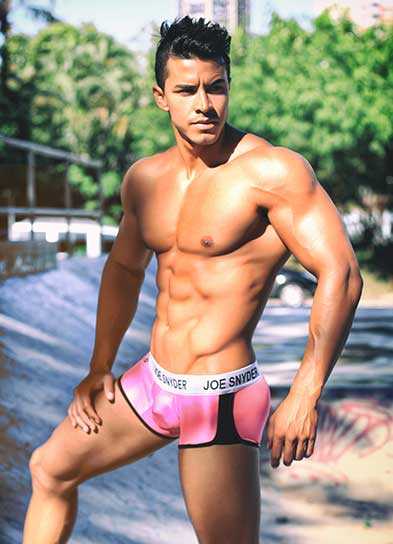 1958, Mr. Jesús Vargas Abín established in México "De Vargas", store where he sold shirts, trousers, suits, ties, underwear, accessories, etc. In 1977 Mr. José Vargas Snyder started working with his father. He continued offering the same products until his father died in 1977.rnIn those days men underwear covered men's virility, failing that objective: supported men's virility. The customers were looking for sensual underwear, Mr. Vargas Snyder noticed people needs due to his vast experience in men's clothing. His idea produced the exclusive Exclhom design, a garment made of Polyamide Elasthan, that fitted perfectly man's body. He manufactured and sold the product in his own store, the customer bought these articles since the first exhibit day, proving he was right. He decided to sell his garments in other stores, contacted clothing business people, and hired a sales broker. The wholesalers considered the design too cheeky, they thought the customer would reject them, but he didn't give up. Due to the great result obtained in his store, he started selling to retail customers. In 1988, the country's economic crisis forced the company to stop the garments manufacturing, undertaking it back to basics. "De Vargas" restarted as in 1971. At the end of 1990, "De Vargas" profits were hampered, then Mr. Vargas Snyder started all over the business that he had worked before: manufacturing Polyamide Elasthane garments; this time he will make them in a professional and ambitious way, trying to sell them to prestige wholesalers. In March 1991, Joe Snyder® returned to the market. Many old customers were buying poor quality similar products made by people that once worked in "De Vargas", this fact made Joe Snyder's® return very difficult. With excellent service, attention, and strict quality controls, the company recovered some old customers and gained new ones. The company applied for a patent of models and sold the products to diverse prestige wholesalers, keeping the retail buyers. Actually, Joe Snyder® is sold in Palacio de Hierro, Gigante, Comercial Mexicana, Woolworth, El Nuevo Mundo among others, and its been distributed in 150 boutiques all around the country and exports to several countries like the USA. Singapore, United Kingdom, Germany, Canada, France, South Africa, and other countries. Joe Snyder's® working team consists of 32 people and the sales in the last years they ascend to 500.000 annual articles.
You need to login or create account

Save products on your wishlist to buy them later or share with your friends.

No account? Create one here
Product added to wishlist